The farm “Malila” was founded in the 1920s from Riikka and Kalle Malinen and named  “barrenness from Lammu”. It consisted of the surrounding woods, fields and the farm itself.

The farm contained the main house, a granary, the cowshed with stable and a sauna with water well. My mother was born in this sauna, as well as her first born son. The old sauna doesn’t exit any more. At this site the new tractor hall was built. The new sauna is nowadays nearer the main house. By the side of the sauna a modern log-built residence was erected in 1986, which is used for our B&B-service.

The old granary is in a relatively original state, only in the rear a dormitory was added to host all the big families and helping hands needed during summer hay  times. 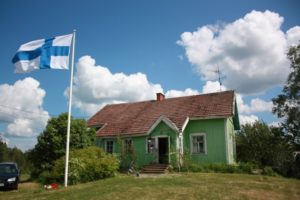 Old painting of the farmhouse.